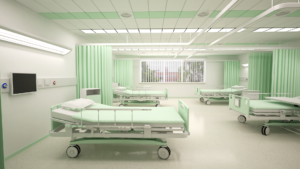 Bugs on the Wards: The Hidden Realities of Antimicrobial Resistance, and Hospital-Acquired Infections

The ward round is not always a stroll in the park. Every once in a while, there will be admissions that baffle clinicians and challenge the most experienced among us. Yet the trick remains the same; if you can listen attentively to the patient speak, examine them thoroughly and bring in some laboratory support, you will have a clearer picture of the problem. I have been in the wards long enough to know that, or at least to have the basic idea.

However, at the end of the day, the doctor will always treat only what they see. The Greeks rightly believe, “out of sight is out of mind!” This holds true even for antimicrobial resistance and hospital-acquired infections—which are defined as infections contracted after 48 hours of hospitalization (Revelas A, 2012).

For reasons we cannot exhaust here, there are a million questions raised on ward rounds that remain partly unanswered: Why do admitted patients seem to get sicker in some instances? Why do patients get admitted with one illness and die of another infection? Research has brought to light the heavy burden of hospital-acquired infections and the heavy toll they are taking on the health services, more so in low- and middle-income countries, or LMICs (Cleemput I, et al, 2013). That is the least of our problems, it seems now, because the bacteria, or bugs, that cause these infections appear to have new weapons: resistance, and we have no game plan for how to combat them (Kamat et al, 2008). While the mechanisms of resistance continue to be studied, this phenomenon is basically understood among scientists as the various ways by which the bugs render medications developed against them ineffective. (O’Neill J., 2016).

This reality rather wears a difficult mask, as there is limited data to expose it all (World Health Organization, 2011). Convincing all stakeholders of the actual threat posed by antimicrobial resistance is proving difficult because the proof is lacking, and here it holds true again that out of sight is out of mind. Clinicians do not treat what they do not see!

Yet we do know that there are bugs joining on every ward round. Beyond the primary ailment patients come into the hospital with, there exist imminent threats from microbes resident on hospital wards. While infection prevention and control play a significant role in containing the dangers patients face from these microbes, there remains still a large role for clinicians to play (Cleemput I, et al, 2013 ). Getting them to put all hands on deck will need more than cheerleaders’ claims; we need actual proof, actual data, convincing data!

At the moment, we don’t have such data. It is evidently beyond most LMICs to set up the infrastructures and well-resourced centers needed to produce adequate surveillance data on antimicrobial resistance (World Health Organization., 2015). This lack of data does not remove the threat, however. We have to come to terms with the fact that we fight an unperceived enemy; if we can at least agree to that, it would be a good starting point.

The question remains then: is the ‘hidden’ reality of bugs on the ward anything to worry about?

It is, and here’s why: Making a critical diagnosis that requires admission of a patient to the Intensive Care Unit (ICU) is slowly becoming a death sentence rather than a life-saving move. The resistance to hospital-acquired infections in ICU facilities in LMICs is tremendously high, a few studies reveal (Pendleton JN., et al, 2013).  This even makes the whole picture even more complex. The bugs do not only stroll on the basic wards but have penetrated into what are supposed to be the best care-providing facilities. And this happens seemingly out of our sight! It is a reality that we do not see in the same light.

Policymakers, hospital staff, and clinicians need more than common ground to make big differences. This can only happen if the true magnitude of the problem is rightly brought to light. The solution lies in mobilizing more resources to aid in surveillance and research to provide evidence-based approaches (O’Neill J., 2014).

The wards are truly infested with resistant bugs, but unless that reality is laid bare, clinicians will always lag behind in one way or the other in the needed efforts to curb antimicrobial resistance in hospital-acquired infections. Their valuable contribution, through the appropriate use of available antimicrobial drugs to improve patient outcomes while avoiding the emergence and spread of resistance (or antimicrobial stewardship), will remain largely unfulfilled, creating a weak link in the chain of fighting resistance (Gerding DN, 2001).

6.         Chidozie Declan Iwu et al., 2021. An insight into the implementation of the global action plan on antimicrobial resistance in the WHO African region: A roadmap for action.

About the Author: Mandela Ncube is a finalist medical student at the University of Zimbabwe in Harare Zimbabwe. He is an ardent AMR Champion.