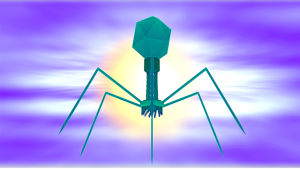 Do antibiotics need to become a thing of the past with the global health threat they pose through antibiotic resistance?  Advancements in biotechnology have opened up new possibilities to replace antibiotics. The constant exposure to the many modern healthcare antibiotics increases the likelihood that resistance gene transfer events occur, increasing antimicrobial resistance. However, mitigation strategies to lower antibiotics usage include antibodies, probiotics, bacteriophages, oligonucleotides, antimicrobial peptides, lysins, and more. Each of these has many benefits and drawbacks, many still being in the research or clinical trial stages.

Bacteriophage (phage) therapy is one of the most prominently researched alternatives to antibiotics and has been around for a long time. Bacteriophage viruses are bacterial parasites, virulent phages that perform lytic cycles are therapeutically relevant. (Brives and Pourraz, 2020).

During the absorption stage, the phase attaches to the bacterial membrane; this is highly specific to a particular bacterial species. The phage then injects genetic material, which is replicated via bacterial enzymes. These enzymes synthesize proteins and lipids needed from capsids (Brives and Pourraz, 2020). After the components are assembled, the bacterium is lysed, releasing between 50-200 phages (Brives and Pourraz, 2020), destroying it.

When all bacteria are destroyed, the phages degrade without a host. When using phages therapeutically, phages specific to a particular infection-causing bacterium need to be isolated, amplified, and used to treat the infection. Phage therapy can be used either as a replacement or alongside antibiotics. Phage therapy use with antibiotics can reduce the acquisition of resistance in bacteria (Brives and Pourraz, 2020). The specificity of phages makes this a particularly good therapy able to treat specific infections. Phage therapy also has drawbacks as a treatment; bacteria can develop phage resistance; if this were to occur, it would render the treatment completely redundant.

Phages can cause the immune system to overreact, which cause further destruction to the host’s body. There is a lack of knowledge about dosage and side effects, which means that further research needs to be conducted to use this treatment as an alternative to antibiotics.

Quorum sensing is the ability of bacteria to communicate, detect and respond to cell population density via gene regulation mechanisms and expression of virulence factors. Increased bacterial population density causes invasive phenotypes presentation, like biofilm matrix formation, which can be formed by releasing different chemicals.

Biofilms enable bacteria embedded within to become protected from antibiotics and host immune systems. Therefore, quorum sensing inhibitors (Quorum quenching) can be used to block quorum sensing mechanisms to stop the formation of biofilms and invasive bacterial phenotypes. Many bacteria can be rendered non-pathogenic by inhibiting quorum sensing mechanisms. A disadvantage of this treatment is that quorum quenching agents need to be very specific for a particular microbial infection to be efficient (Krzyżek, 2019). Many different quorum quenching agents need to be engineered to inhibit quorum sensing in a vast range of bacteria that all use other pathogenic mechanisms. Quorum quenchers can also interrupt the microbe-host interactions, which can cause the host problems. Resistance to quorum quenchers can occur; this is a big problem when exercising this treatment as an alternative to antibiotics.

Probiotics are microorganisms that, when ingested in adequate amounts, can colonize the host and help in the modulation of different biological functions (Silva et al., 2010). This symbiotic relationship creates health benefits to the human host. The microbiome containing these commensal bacteria helps maintain and regulate intestinal gut health (Silva et al., 2010). They can increase microbial resistance.  Their biological functions can include antibiotic activity.

Clinical trials have shown that probiotics have successfully fought many infections; however, there has still been very little research in this area. For example, efficacy, safety, dosage, and probiotic action mechanisms (Silva et al., 2010) need to be further studied.

Antibacterial monoclonal antibodies (MAbs) can help activate the host’s immune system and target biological pathways (Schirrmann, 2019). In fighting an infection, the adaptive immune system produces T cells and memory B cells that produce antibodies and have lifelong immunity. An immune response can be triggered via vaccination; however, this immunization can sometimes fail.

The alternative use of MAbs can be important in infection treatment. They can be used prophylactically so that the host does not develop a bacterial disease or therapeutically to fight a present infection. There are many different strategies in using MAbs, including targeting specific pathogen epitopes (Schirrmann, 2019). These antibodies’ specificity means that less damage is caused to the host when fighting the infection as commensal in the microbiome are not targeted. The variance in pathogens, the many entry routes, and different pathogenic mechanisms (Schirrmann, 2019) are all challenges that this treatment faces which need to be overcome to be an appropriate alternative to antibiotics.

Extracorporeal pathogen removal filters (Opal, 2016) are being studied and developed. They can bind and then remove many different pathogens in the bloodstream. Examples of these types of filters include the use of mannose-binding lectins (Opal, 2016). The removal of many of these disease-causing pathogens means that the body’s immune system can rid of the rest of the bacteria, helping the host to overcome the infection. This treatment has been studied specifically in response to sepsis cases, wherein systemic immune reactions occur in response to systemic disease (Harm et al., 2019).

The hemofiltration device will remove both inflammation mediators causing much of the immune response and the microbial toxins destroying the body, helping to reinstate immunological haemostasis (Harm et al, 2019). The success of these devices is limited. Differences in pathogenic mechanisms of microbes and differences in the host immune responses are challenges that need to be overcome for more widespread clinical use of this treatment. Different clinical testing devices have various downfalls; some are unable to display all cytokine removal mechanisms by blood purification, others did not show good absorption kinetics, and others showed nonspecific absorption (Harm et al., 2019).

Many treatments are taking the lead in the fight against bacterial infections during the antibiotic resistance crisis. However, many of these treatments are only in the research stage, or there is very little knowledge about the long-term effects and efficacies. Phage therapy has been the most highly researched and one of the most promising at present. However, it does have downsides, reducing its widespread clinical use, such as the development of phage resistance by bacteria and the overstimulation of the immune system. Hemofiltration devices are already being used clinically, but the wide range of devices has their own disadvantages as a treatment.

Monoclonal antibodies, oligonucleotides, and quorum quenchers are newer treatments with less clinical understanding but seem promising future alternatives. Increased research is needed to be able to appropriately and safely use therapy to replace antibiotics. This needs to be a rapid process as antimicrobial resistance is growing at an alarming rate, more people than ever are dying due to the lack of treatment for infections.