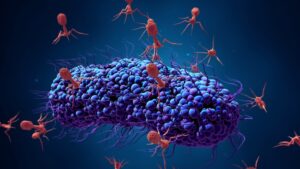 “Microbes Against Microbes”; Exploitation and Use of Microorganisms for Treatment of Infections

Probiotics are live microorganisms that, when adequately administered, produce beneficial effects on the body5. They prevent infections by inhibiting the pathogenic bacteria by secreting antimicrobial metabolites such as bacteriocins, organic acids, hydrogen peroxide di-acetyl, and acetoin6. Probiotics have been found to be effective against bacterial biofilms and have been used in the prevention of food spoilage because of their inhibitory effect against bacterial growth6. Biofilms are a complex association of microorganisms that forms on surfaces and are protected by complex polymers of extracellular polysaccharides which can prevent the microorganisms from destruction by harsh chemicals such as antimicrobial agents, thus facilitating the development of antimicrobial resistance7. Lactic acid bacteria are good examples of probiotics that have been used in the prevention of adhesion of bacterial pathogens on surfaces hence preventing biofilm formation8.

Recombinant DNA technology has been successfully used in the production of antimicrobial peptides, drugs, and vaccines. This involves two main processes: upstream and downstream9. Upstream processes include cell lysis, fermentation, construction of a plasmid, host transformation, selection of transformed cells, and production of the transformed cells in the host, while the downstream ones involve the harvesting of the transformed cells, separation of cell debris and media components, concentration, bio-conjugation, purification, protein characterization, and refolding9. E. coli has been largely used in recombinant DNA technology due to its ease of manipulation10. Generally, the genes that code for antimicrobial peptides in the source organisms (mammals, bacteria, fungi, arthropods, and insects) are isolated and inserted in a microorganism (E. coli) where the protein of interest will then be expressed and produced in large quantities, harvested and finally purified for use in treatment11.

Antimicrobial peptides are small protein compounds that are useful in the inhibition of various types of microorganisms5. They have the potential to elicit the host’s immune response, as well as act as the first line of defense by stimulating angiogenesis and chemokines. Interestingly, they portray a broad spectrum of activity against various types of microorganisms and can be found in bacteria, vertebrates, invertebrates, and plants12.

Large AMPs which consist of approximately, 100 amino acids act by causing bacterial lysis, binding to nutrients, or targeting specific macromolecules in bacteria, while the small ones act by interfering with the function and structure of bacterial cell membranes or by directly causing bacterial enzymatic interference by interacting with Adenosine Triphosphate (ATP)13.

For instance, isolation and purification of antimicrobial peptides from Saccharomyces boulardii have been achieved using sonication (cell lysis), and ultrafiltration through dialysis membranes (purification), respectively14. Then the microbial inhibitory effect can be assayed by subjecting the purified peptides on the pure colonies of the microorganisms to being tested.

In the search and development of antimicrobial agents, microorganisms also play a pivotal role. They can be utilized either directly to provide defense against invasion by other infectious agents or indirectly as tools of production of anti-infective agents. Microorganisms are so vast in nature, and they should therefore be explored in order to innovate potential and effective therapeutics against infections including drug-resistant ones.

There is an urgent need to employ these and other innovative approaches to increase research and development, as well as access to novel antimicrobials, especially in the low-resourced settings such as Africa.

About the Author: Jimmy Nkaiwuatei recently completed a Bachelors in Biochemistry at Jomo Kenyatta University of Agriculture and Technology. He is the Head of Drug Research and Discovery at Students Against Superbugs Africa and has been at the forefront of advocating for the active inclusion of students and early career professionals in the research and development of new diagnostics and therapeutic interventions to mitigate Antimicrobial Resistance.