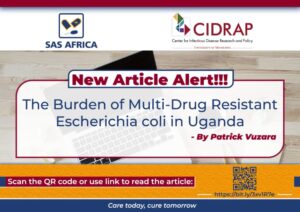 The Burden of Multidrug-Resistant Escherichia coli in Uganda

Escherichia coli (E. coli) is a rod-shaped Gram-negative facultative anaerobe that is a commensal microbiota in the intestinal tract of humans, fish, and poultry.[1] It is considered an indicator and potentially opportunistic microbe,[2] and is a common cause of community- and hospital-acquired infections worldwide, including diarrhea, urinary tract infections, meningitis, and septicemia.[3] [4] Pathogenic strains of E. coli in poultry harbor many virulence genes and may carry antimicrobial resistance (AMR) mechanisms that influence disease presentation and treatment outcomes.[5]

AMR occurs when bacteria evolve to become resistant to the drugs used to treat infections and make those drugs less effective. The rise and spread of drug-resistant bacteria has developed into one of the leading public health fears of the 21st century.[6] Resistance to commonly used antibiotics is ascribed to the inappropriate use of these drugs by clinicians without evidence of a causative agent and antibiogram, and to self-treatment with readily available and cheap over-the-counter antibiotics.[7] Additionally, agricultural practices have been implicated in the emergence and spread of AMR, owing to the fact that antimicrobial agents are used as growth promoters and for prophylaxis in livestock production.[8] Transmission of resistant bacteria from animals to humans may occur via the food chain, environment or by direct interaction with animals.[9]

Because E. coli is the most common Gram-negative pathogen in humans, growing resistance to common antibiotics like cephalosporins and quinolones, as well as multidrug resistance (MDR), have been recognized as a global problem.[10] In 2019, it was reported that 1.27 million deaths were attributable to AMR and 4.95 million deaths were associated with AMR globally, and E. coli was one of the six leading pathogens linked to those deaths: 23.4% of deaths attributable to AMR and 24.3% of deaths associated with AMR were due to E. coli.[11]

Uganda, which has a structured national AMR surveillance program in alignment with the World Health Organization Global Antimicrobial Resistance and Use Surveillance System (GLASS), is one of many low- and middle-income countries where AMR poses a significant health threat. It has been reported to have a high burden of infectious diseases and high rates of antibiotic use and is consequently vulnerable to AMR.[12] Research has shown that 40% of the individuals who visit a healthcare facility in Uganda are treated with antibiotics.[13]

Although data on drug-resistant infections in low- and middle-income countries like Uganda is scant, drug resistance has been reported to be prevalent in healthcare settings in Uganda.[14] In Uganda, E. coli has been identified as one of the most prevalent (45.62%) GLASS priority pathogens, with high resistance noted in ceftriaxone (52.7%), and imipenem (18.8%), and ciprofloxacin (52%).[15] E. coli were reported to have caused 9.68% of surgical site infections in Southwestern Uganda, with 55.5% of these isolates highly resistant to commonly used antibiotics.[16]

Additionally, a 22.8% prevalence of phenotypic carbapenem resistance of E. coli was reported in a study conducted in four referral hospitals (Mbale Regional, Mbarara Regional, Mulago National, and Kampala International University-Teaching Hospital), with the highest prevalence (53.9%) obtained from Mbale regional.[17] Martin et al. also reported a high prevalence of non-typeable strains of MDR E. coli isolates from the urinary tracts of patients in Bushenyi, Uganda that were resistant to erythromycin, co-trimoxazole, and ampicillin.[18]E. coli was also the most common uropathogen (71.9%) isolated among HIV-infected patients in Uganda, whose isolates were completely resistant to cotrimoxazole and ampicillin.[19] Cotrimoxazole is being used as prophylaxis for opportunistic infections in this group of patients.

Based on another study, patients with  MDR E. coli infections had significantly higher odds of dying within 30 days of the onset of their infection as compared to patients with non-MDR E. coli infections.[20] Fluroquinolone resistance among E. coli isolated from the urinary tract has also been reported from Bushenyi Uganda, with ofloxacin being the most resistant (34.9%), followed by moxifloxacin (32.5%), levofloxacin (27.9%) and ciprofloxacin (26.7%).[21] Urinary tract infections are one of the most common infectious diseases, and they can damage different parts of the urinary system such as the urethra, bladder, ureters, and kidney. It is estimated that nearly 150 million people annually are diagnosed with UTIs, costing greater than $6 billion US dollars used for healthcare.[22]

In addition, E. coli is widely distributed not only in humans in Uganda but also in domestic animals and other primates, as reported by Weiss et al.; in a study of E. coli isolates from rural Uganda, they found the frequency of resistant E. coli was 57.4% in people, 19.5% in domestic animals, and 16.3% in wild nonhuman primates.[24] Another study found an 88.4% prevalence of multidrug-resistant E. coli isolates in poultry in Uganda.[25] A study conducted in northern Uganda reported that 47.5% E. coli isolates obtained from pigs were resistant to sulfamethoxazole (88%), tetracycline (54%), and trimethoprim (17%).[26] Oreochromis niloticus (Nile Tilapia), a commonly consumed fish species in Uganda, were reported to be reservoirs of E. coli that were 72.7% resistant to ampicillin and erythromycin.[27]

In a low-resource country like Uganda, many factors are likely to contribute to the transmission of resistant E. coli strains, including poor hygienic practices and environmental hygiene that is potentiated by low levels of funding and supervision of sewage systems.[28] Uganda’s structured national AMR surveillance program could play role in monitoring transmission and estimating the effects of resistant E. coli on incidence, deaths, hospital length of stay, and healthcare costs.

Limiting the spread of resistant E. coli can be achieved at all levels of society, such as individuals, policymakers, health professionals, healthcare industries, and agricultural sectors. These measures include; avoiding the use of leftover antibiotic prescriptions, ensuring taking full prescriptions of prescribed antibiotics, use of antibiotics only when prescribed by a doctor, avoiding antibiotics as growth promoters in animals, vaccinating animals to reduce the need for antibiotics, investing in research and development of new antibiotics, reporting antibiotic-resistant infections to surveillance team, preventing infections by regular hand washing, hygienic food preparations, following doctor’s advice on antibiotic use and keeping vaccinations up to date.