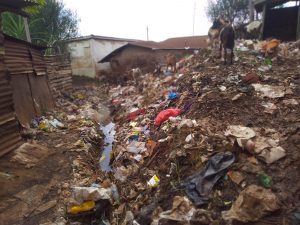 A ‘ticking time bomb’ in urban informal settlements: A case study of the poor hygienic conditions in Kiandutu Slums (Thika), Kenya and how this could aggravate the threat of Antimicrobial Resistance.

Our Community Based Initiative program targets urban informal settlements within Africa. The program aims at instituting positive behavior change on antimicrobials use in the community as well as establishing cost-effective sanitation programs to reduce infectious diseases transmission rate which is very high in the settlement . As per the One Health Approach in tackling Antimicrobial Resistance, we recognize the role the environment plays in harbouring resistant pathogens as well as catalyzing their transmission in areas with poor sanitation. To be better informed of the underlying situation, we conducted a visit in Kiandutu slums on 15th November 2019 from 0800hrs to 1400hrs.

The key objectives of the visit were:

The visit was divided into 3 phases:

PHASE 1: SPOT-MAPPING ON THE SANITARY CONDITIONS IN THE AREA

The first stop was at Kiandutu Shopping Centre. Foul smell emanated from the raw sewage that lay adjacent to the roadside. This was a clear health hazard. Open hotels operated near the sewage with house flies buzzing over the food, a clear sign of contamination. The garbage was all over the muddy road with no designated garbage site in the region.

The excreta disposal mechanisms in the area are poor. After assessment, no flush toilet was found in the area. There are very few latrines in relation to the population. Most of them are government-owned and cleaning does not take place. The few private ones are owned by individual households. The public land where the government latrines are built have been converted to dumping sites deteriorating their condition even more. Bathrooms are unheard off in most parts of the slums and most people prefer bathing inside their small houses. This makes the ground wet presenting a causative factor for respiratory tract diseases i.e. common cold and pneumonia among the children.

Water shortage is also a crisis in the area. Most of the households have to buy water from vendors. There is limited piping in the area and even in the areas where public water systems exist, there is frequent water shortage. As a result, water washed diseases are highly endemic in the area.

Majority of the population in the area live in shanties made of mud, tins, cards and corrugated iron sheets. The houses are clustered together with about 10 families living in one cluster. Most of the houses lack proper sewage systems, waste disposal units and water. Lack of home compounds and public playgrounds has resulted to children playing on the road adjacent to the sewage. These practices are prone to contamination and increased infection transmission rate.

Our first host was Mr. Kimani, a boda-boda rider. He also acted as our guide throughout the visit. His first concern was insecurity prevalence in the area. He explained to us that most of the visitors in the area are usually mugged if found traversing the area alone. This is associated with the high unemployment status among the local youth. Complaining of poor sanitation in the area, he blamed the government for neglecting the area. He also associated the poor development status with the community mindset and perceptions.

Our second host was Mr. Hussein’s family. Mr. Hussein has lived in the area for almost 30 years. He complained of frequent chest pains, coughing and deteriorating eyesight. It was evident that some of his children and grandchildren were suffering from malnutrition. The house made of cards and tins was severely congested with over 20 family members. He complained of frequent diarrhea, typhoid and pneumonia among the children. Urinary tract infections were also endemic among the women.

Our last host was Mr. Mohamed. Mr. Mohamed Abdirahman is a community leader in the area. He serves as the Imam Jamia Mosque, Kiandutu. He was very elaborate on the challenges facing the settlement while offering to show guide us around. He complained of the increased prevalence of infections in the area especially among children, He cited diarrhea, cholera, and respiratory-tract infections as some of the most common diseases that locals complain of. He cited on the importance of collaboration among community members on waste disposal and rotational cleaning of the government latrines. He offered his help in mobilizing the community in the area.

Kiandutu has only one government health center despite the large population in the area. The session at the hospital was brief as most health professionals were occupied. The health center was overcrowded and appeared to be understaffed. A chat with the Medical Superintendent revealed that infections respiratory tract as well as gastrointestinal infections were very high in the area. This could be associated with the poor sanitation in the area.

From the findings above, the incidence of hygiene related diseases in the Kiandutu slums is alarming. This sis further compounded by the fact many cannot access health care facilities due to the associated costs and the existing perceptions. This could be a trigger for accelerated levels of antimicrobial resistance in the area. The visit helped inform our team of the existing conditions in the urban informal settlements and also served as a guidance of structuring community participation in the programs we are to roll out in the future.