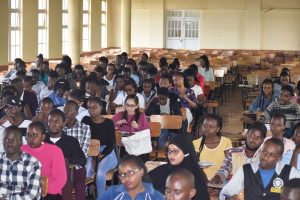 Young people harbor the biggest potential in curtailing the spread of Antimicrobial Resistance. Every year about 700,000 deaths are linked to infections associated with antibiotic resistant bacteria. In the near future, young people particularly students will be the stakeholders in major sectors such as health, policymaking, leadership, education, and politics. If sensitized appropriately on AMR, they will be at the front-run in advocating for multidisciplinary interventions to fight AMR.

The session was facilitated with the key focal points being:

From the registration data, most of the university students who registered for the session were pursuing courses in healthcare sector. It was therefore imperative to customize the session to their professional aspirations.  As per the World Health Organization definition, AMR can be defined as the “resistance of a microorganism that was originally effective for treatment of the infections caused by it.” Generally, resistant microbes are referred to “superbugs”.

At the molecular level, microbes develop mechanisms to resist the effects of antimicrobials. The microbes may physically block or remove antimicrobials from the cell. They may also alter its binding site making it unrecognizable or produce enzymes that cleave the antimicrobial agent. For example; Beta-lactamase enzymes found in a number of bacteria are responsible for cleaving the beta-lactam ring contained in various antibiotics such as penicillins and cephalosporins.

Diseases such as pneumonia, diarrhea, malaria, sexually transmitted infection (especially gonorrhea) and TB among other nosocomial infections have become huge burdens on the health system.  Before these diseases were easily managed with available therapies. The increase in resistance has however made them difficult and costly to treat. AMR drastic implications have not only in terms of poor health outcomes but also devastating social, financial, and psychological effects.

Unnecessary and inappropriate use of antimicrobials exacerbates the development and spread of AMR. Dr. Karim Wanga went on to categorize AMR as a multi-faceted complex problem with input from human health, animal health, plants, the environment, and subsequently food. He emphasized on the need of concerted effort in fighting AMR anchored on a One Health Approach. The main drivers of AMR are; improper use in humans, improper use in animals and plants, subsequent transfer of resistant microbes to humans through food, and their accumulation in the environment especially in soils and water bodies.

The improper use of antimicrobials in humans results from complex and interacting factors cutting across all levels of the healthcare system. These include: legislation, and regulation, supply chain management, quality assurance, prescribing and dispensing practices, and patient behavior. Being the future health professionals, most students will be involved in regulation, supply chain management as well as prescribing and dispensing. Dr. Wanga urged on the need to abide by ethical principles and also being cognizant of the looming crisis while making clinical decisions. A case example was given of how pharmaceutical promotion promotes irrational antibiotic prescribing among prescribers. He encouraged those willing to venture in drug manufacture and distribution to focus on the long term goals. If all antibiotics became resistant, then business would be unfavorable for them. Lastly, he emphasized on the need for improved research both in the academia and the regulatory institutions to inform policy.

Students should be front-runners in the fight against AMR. They have the energy to educate the community and are the potential professionals in the future. It is therefore essential to instill a culture of social responsibility, and the spirit of an Antibiotic guardian in them. Julian explained the willingness of ReAct Africa in supporting student AMR initiatives.  She encouraged the attendants to take up the role actively and become ambassadors of AMR in the community. She also encouraged students to take up research and innovation for the development of novel solutions for the crisis.

The session was concluded by a vote of thanks from our Head of Programs, Daniel Waruingi. A group photo followed thereafter.

“Be the change that you want to see,”- Dr. Murage.