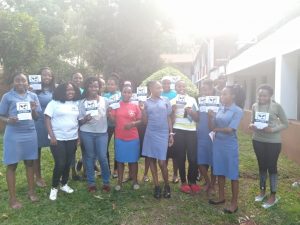 Priming students to be responsible professionals in the future: Students Against Superbugs Africa conducts a training on Antimicrobial Resistance at Kenya School of Medical Sciences and Technology, Coptic Hospital, Thika.

About 20% of the consumed antibiotics are derived from the hospital sector while the rest are obtained from community pharmacies, which are the first line of treatment for most people in Sub-Saharan Africa. Health students have a great role to play in shaping the community’s behaviors and attitudes on the use of antibiotics.

Empowering students with knowledge on Antimicrobial Resistance (AMR) and challenging them to be socially responsible by disseminating the same knowledge to their communities can go a long way in reducing the rates of Antibiotic Resistance in Africa. More so, in the future when they transform to professionals, they will be champions of change in healthcare systems effecting rational prescribing and dispensing of Antimicrobials.

This was our clarion call to Kenya School of Medical Sciences and Technology on Friday, 20th March 2020 from 2pm to 5pm. The college is a subsidiary of Coptic Hospital, located at Majengo, Thika town. The college offers health related courses while incorporating the students with cut-edge practical skills through placed rotations and attachments in the hospital. Our organization was hosted by the college’s Health club under the leadership of Juliet Mumbua and Rosaline Murugi.

The objectives of the forum where:

The forum was structured as an engaging presentation forum. Student Against Superbugs (SAS) Africa was represented at the forum by Daniel Waruingi, Lewis Kiplagat and Karen Ntinyari. The session commenced with an engaging game to acquaint the audience with the speakers and fellow students.

The session then proceeded with insight on the objectives as follows:

From a random survey conducted, most students within the institution were not aware of Antimicrobial Resistance. To some, this was their first time and others only had a vague idea of what it is. This is a looming challenge given that the students pursue health courses.

Daniel Waruingi presented on the above. For easier understanding, reception and remembrance, comic effects such as animations on the above concepts were used.

There are two types on resistance: intrinsic and acquired resistance. Intrinsic resistance occurs when certain microbes are pre-programmed to be resistant to certain types of antimicrobials. A good example is gram-negative bacteria which have a cell-wall covered by an outer membrane which physically blocks various types of antibiotics from working.

Daniel went on to explain that the current focus is however on acquired resistance which happens through 2 major ways which are: spontaneous gene mutation during replication (vertical transmission) and exchange of gene between microbes (horizontal transmission). Definitively, microbes have specific mechanisms at the molecular level. The mechanism were well projected using a pictorial diagram in the presentation. The mechanisms include:

The main drivers of Antimicrobial Resistance are irresponsible actions by human beings which are intentional or due to ignorance. This primes for induction of positive behavior change. Resistance is a natural process but inappropriate use of antimicrobials exacerbates the development and spread of AMR (WHO, 2015). The main drivers of AMR as presented were outlined to be:

As seen, the menace cuts across, all sectors. A multidisciplinary approach is thus the best approach in tackling AMR.

The students were further sensitized on the AMR burden and the risk it poses for the human population. According to WHO, AMR accounts for 700,000 deaths every year. Most of this deaths are projected to be in Sub-Saharan Africa due to inadequate diagnostic capacity and routine surveillance on Antimicrobial Resistance. If we do not tame the menace, the deaths may project to 10 million yearly and USD 100 trillion in terms of healthcare cost.

AMR also aggravates various endemic diseases such as pneumonia, diarrhea, malaria and sexually transmitted infections. This is due to increased resistance of the various medications available.  A high risk exists in acquiring nosocomial infections of resistant bugs especially in healthcare settings with poor hygiene standards.

To emphasize on the point, Daniel gave a case example of James, a construction worker. James was admitted to Kijabe hospital following a traumatic event where his head had been injured. After his admission to the hospital, he acquired a nosocomial infection on Methicillin-Resistant Staphylococcus Aureus (MRSA). Eventually he died as a result of the same. Many more examples were given to insist on the issue.

After the presentation, it was now time to discuss on the actions students could partake to prevent the spread of AMR. This session was moderated by Karen Ntinyari. After a fruitful discussion the following key insights were agreed on:

AMR is a global threat and it will take a concerted effort of all stakeholders to curb it. Students are the key players being the future health professionals. They have the energy required to stimulate impact. A foundation stone on AMR awareness was laid that day at Kenya School of Medical Sciences and Technology. As an organization, we will see to it that the same sensitization goes on in the institution by assisting them develop sustainable initiatives.

Special thanks to our facilitators for their willingness to conduct the training: Ms. Karen Ntinyari, Mr. Daniel Kariuki, and Mr. Lewis Kiplagat.